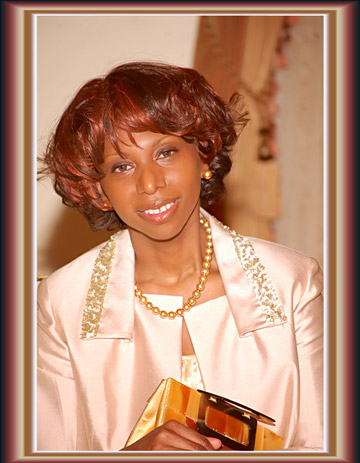 Ezekiel 44:23 (KJV)
“And they shall teach my people the difference between the holy and profane, and cause them to discern between the unclean and the clean”.

Jen Harvey was born on a beautiful island nestled in the heart of the Caribbean. Her early entry into the world would begin to paint a portrait with hues of bright colors and shades of gray. Born prematurely at only 3.5lbs, her fight for survival began from day one and her life today proves she is a victor. Her genesis in a Christian home and Christian high school began to form the values that have shaped the core of who she is today.

Goodbyes are never easy, and on February 7th. 1986, she said goodbye to her beautiful home in Jamaica, to embrace the culture, climate, and conditions that make New York uniquely New York. High school was a kaleidoscope of confusion, frustration, and dissatisfaction, all of which led to her leaving before graduation. Determined that education was her ticket to finding her purpose, she obtained her GED and enrolled in Kingsborough Community College to pursue her studies.

Her two and a half years at Kingsborough led to a transfer to the SUNY Downstate Health Science Center of Brooklyn, where she pursued a Bachelor’s of Science in Nursing and graduated in May of 1995. Degree in hand, she thought to herself, “purpose accomplished.”

But it was not to be; soon a medley of boredom and hunger became resident in her heart. She knew there had to be more to her life than being a nurse.  Not knowing how to unearth or decode the inner turmoil she lived with, she attempted to distract herself with the pursuit of fun, friends, and the gold rush.  Her life entailed working long hours and multiple jobs; nevertheless, her busyness did not quell the emptiness and yearning within.

She then decided if a Bachelor’s degree did not answer humanities age old question of “why was I created?” then the acquisition of Master’s Degree was certainly the answer.  Her return to her alma mater to pursue a Master’s Degree in Nurse Anesthesia proved to be a formidable challenge; one that would usher her to God’s altar and from her backslidden state. November 2001 proved to be a year of new beginnings. A journey she knew not where it would lead. But one she knew who was leading her.

Her then pastor and father in the Lord was Bishop Olu Itiola, a godly mentor. Under his tutelage, she was fed a hearty, healthy diet of his mainstream doctrinal teaching and lifestyle examples of holiness and righteousness.  He parted the scriptures in a manner that made the word of God come alive to her. Preaching, teaching, and praying were her pastor’s forte. He also had an unparalleled understanding of witchcraft, spiritual warfare, and deliverance; hence, he taught her things most Christians in the Western world have never heard or would believe. Her belief in the existence of witchcraft and spiritual warfare was cemented during her trips with Bishop Olu Itiola to the African countries of Ghana and Kenya. These missionary trips were eye openers to what the scripture coins “spiritual wickedness in high places.”

Being in a church where its congregation was predominantly African was sometimes uncomfortable, though she was married to a physician of Nigerian decent. It was his invitation to church that brought about the rededication of her life to Jesus Christ in November 2001. Despite her marriage to an African, she was viewed by some as an outsider: but not to her beloved pastor. He saw the gifts and abilities God had endowed in her, and invited her to teach bible studies. With exuberance and trepidation, she accepted.

Her ability to stand before an audience and speak was not the reason for the trepidation; within six months of graduating from her master’s degree program, she was hired to be a clinical instructor in the graduate school of anesthesia. Her dean saw more in her than she realized she possessed, and extended an invitation for her to be a lecturer. Not knowing what God had in store for her, an inner voice encouraged her to accept. She blossomed in the classroom, and a sense of fulfillment escalated. Within two years after her graduation, a prestigious promotion was offered her. Unsure if she had feet to fit the size shoes they required, she went to her pastor who prayed for her without vacillation. This embolden her to accept the promotion, and she was promoted as the director of SUNY Down State’s Nurse Anesthesia Program; one that she had been a student of two years prior. Those who taught her were now her colleagues, and the office she often shied from entering she now occupied as a Clinical Assistant Professor.

Her years between 2001 and 2015 were few and, like Jacob’s, filled with evil. But she was reminded and encouraged, for the Bible says “… all things will work together for good to them that love God, to them who are the called according to his purpose” (Roman 8: 28 JKV) and this was her consolation and experience.  For out of her years of trials, tears, tumult, treachery, temptations, trepidations, tragedies, and triumphs, The Bible Says International Ministries was born in November 2015. A ministry founded on the person and principles of Jesus Christ.  A ministry with the mandate of liberation and empowerment, through use of the powerful weaponry of the word of God, the person of Jesus Christ, and the empowering presence of the Holy Spirit.

Her pilgrimage continues, with purpose being pursued and accompanied by peace and satisfaction that her scholarly accolades or titles could not afford; a peace monies could not finance or fuel. So she goes forth decreeing and declaring what “The Bible Says.”